Business Insider has an interesting chart today. The chart is comparing the stock prices of Cisco Sytems and Microsoft under their respective CEO’s, John Chambers and Steve Ballmer. 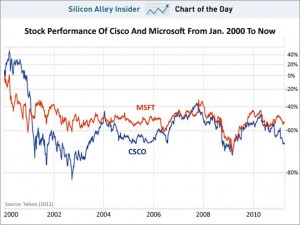 Comparing the stock price of Cisco and Microsoft

Basically, Business Insider is saying that Steve Ballmer is constantly given crap about how poorly Microsoft’s stock has performed with him as the CEO compared to Bill Gate. Meanwhile John Chambers is given a free reign and no one complains of the fact that Cisco’s stock has done even worse than Microsoft.

I would say that John Chambers is given a lot of leeway because of how he handled Cisco through the 1990’s. Back then the stock pretty much did nothing but go up, just like Microsoft. The thing is, I believe a lot of Cisco’s growth was due to acquisitions and not the organic growth of Microsoft.

And today both companies have problems because, they’re really too big to return to the stock price growth of the 1990’s. They both are huge companies and are the dominant company in their industry. I think that’s why you’ve seen Cisco buy up consumer technology companies because, like Microsoft, if they don’t do something with all their cash, they would, you know, have to give it back to the investors which they’re not going to do.

Well, no, Matt isn’t causing any actual problems with the software. I have problems with Matt and his running of WordPress. In case one doesn’t know, even though WordPress is open source and many people submit code and help fix it, Matt controls it. If he doesn’t like something, it doesn’t happen, even if it would be for the better for WordPress.

Don’t get me wrong. Matt, up to know, has done a wonderful job. He forked the original software and created WordPress and has made it to what it is. The problem is now Matt=Wordpress. He would like to say that’s not true but, I’ve been using WordPress for a long time and there have been all sorts of little things pop up that really show that Matt runs WordPress like Bill Gates ran Microsoft.

That sort of command is a good thing for open source projects, I believe, because it can give a project focus. It can give a project drive. The downside is that, well, if you don’t like what Matt wants, you’re shit out of luck. For the vast majority of people, and up until now, me, it’s been ok.

After a heated debate between the founder of WordPress (Matt Mullenweg) and the creator of the mighty Thesis theme (Chris Pearson), it looks like cooler minds have prevailed with Pearson finally embracing GPL for Thesis via a split license.

There is no doubt that Pearson would have lost in court had Matt actually sued. The problem is that Matt threatened to sue in the first place. My problem with that is that he only gets like this when there is someone that doesn’t, for lack of a better phrase, bow down to Matt. This isn’t the only case. It’s happened before and I expect it to happen again. That’s really my problem with WordPress. Matt is turning into a bully and throws his weight around.

As I said on Twitter, if there’s another premium theme you’d like to try out I’m happy to buy you a copy, just send a link and your info to my contact form. It’s better to choose a solid platform now rather than put it off until later. (Matt Mullenweg)

He was willing to cut Pearson off at the knees and threaten his income by offering this bargain. Granted a lot of people probably wouldn’t take Matt up on it but that’s the part that’s sucky. Hey, you want to go on about GPL, just sue the bastard. He had it coming. But instead, Matt decides to try and gut the guy’s business instead of focusing on the GPL issues.

And as for the GPL issues, I still don’t not believe, not agree that the GPL was ever meant to be viral like Matt and Mark Jaquith state. Both Matt and Mark are infinitely smarter about their software and it’s licensing. But I’ve been around Slashdot and Reddit enough to have read about other people who’ve had GPL issues. Pretty much they all prove, that, well, because WordPress is GPL does not necessarily make themes or plugins automatically GPL.

So how does this directly affect me?

I neither make plugins nor themes, for myself or others.

And it’s the but that’s the issue. Do I really want to invest any more time or effort to a platform that is controlled by one person who can decide to ruin you if he chooses? Not really. It’s not helping Microsoft, not sure why it’s ok with WordPress.

While I think WordPress has so far, been a decent publishing platform, I believe it’s time to start looking around and see what else is out there.

I have to say, I’m glad that I haven’t been in too deep with the hype machine that is Apple. It seems they’ve finally pushed people too far and have gone well beyond anything that Microsoft would ever do.

US regulators are considering an inquiry into whether Apple violates antitrust law by requiring that its programing tools be used to write applications for the iPad and iPhone, a source familiar with the matter has now said.

I’m not saying Microsoft hasn’t used its market position, but can you imagine the uproar if it told all its third party developers that not only MUST you buy a Microsoft operating system to create your applications, but you must also only use tools that we allow you to use.

The uproar would be stupendous. You would have geeks rampaging through the streets. Er, ok, maybe not that far. But it really is ridiculous to absolutely mandate that you must create an application only using approved tools.

This is the problem when you have a cult of personality instead of a CEO.

Just when I thought Microsoft couldn’t put out any more stupid ideas, this piece of genius comes along.

A top Microsoft executive on Tuesday suggested a broad Internet tax to help defray the costs associated with computer security breaches and vast Internet attacks, according to reports.

Speaking at a security conference in San Francisco, Microsoft Vice President for Trustworthy Computing Scott Charney pitched the Web usage fee as one way to subsidize efforts to combat emerging cyber threats — a costly venture, he said, but one that had vast community benefits.

“You could say it’s a public safety issue and do it with general taxation,” Charney noted.

Since, Microsoft’s software is the primary vector for most of the attacks that go on and since it is their crappy code that causes all this, I propose we tax the hell out of Microsoft to fix the mess they created.

As they’ve proven beyond a shadow of a doubt that they are either incapable or incompetent at writing secure code, and since this is a public safety issue, we should most definitely tax Microsoft the company to the tune of at least $10 billion to clean up their mess.

Any other bright ideas Microsoft?